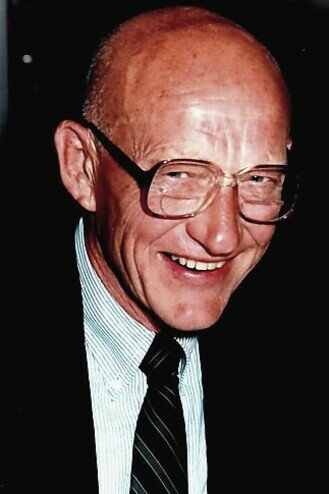 Edgar Eugene Shore, Jr., “Ed” passed away August 8, 2022 at Kate B. Reynolds Home after a hard-fought battle with cancer.  Surviving family include his wife of 61 years, Sarah Frances Mangum Shore; daughters, Hellen Wilson and Nancy Sawtelle (Butch); grandchildren, Meredith Wilson, Michael (Macy), Kathleen, and Thomas Sawtelle; and several sisters and brother-in-law and many nieces and nephews.  Edgar was preceded in death by his parents Edgar E. Shore, Sr. and Mattie Butler Shore of Kernersville, NC; and his brothers, Henry Eugene of Winston-Salem and James Butler of Waynesville.

Edgar loved to tell stories about growing up in Kernersville.  Many of his friends from youth remained friends for a lifetime.  He graduated from Kernersville High School and attended college before serving his country in the U.S. Army.  Other than that, he lived in Kernersville his entire 93 years.  He had a career with Sears, Roebuck and Company which spanned over 30 years.  He was a lifelong member of Kernersville Moravian Church, serving when called in many capacities.  He played in the band and sang in the choir for decades.  Notably, he did not read music; he simply loved it.  He also whistled a lot.

Edgar always enjoyed sports, as an athlete and spectator.  He played baseball and basketball as a young man, tennis at the Y in middle-age, and golf in retirement.  He liked working in the yard and doing handyman projects around the house.  He always had fun going to Ocean Isle Beach, taking trips to the NC mountains, and he embraced some other opportunities for travel.  He worked hard, he played hard, and more often than not, he had a smile on his face.

A graveside service will be held Monday, August 15, 2022 at 10:00 a.m., with a band prelude at 9:45, at Kernersville Moravian Church.  Reverends Christy Clore and John G. Rights will officiate.  The family will receive friends under the maple trees beside the chapel following the service.  Due to the ongoing pandemic, please observe Covid precautionary measures.

In lieu of flowers, memorial contributions may be made to Laurel Ridge Camp, Conference and Retreat Center in Laurel Springs, NC or Kate B. Reynolds Hospice Home/Trellis in Winston-Salem.  The Shores are most grateful to the Trellis team for their care of Edgar and support for the family in his last days.

Friends and family may view and sign the guestbook at www.pierce-jeffersonfuneralservice.com

Share Your Memory of
Edgar
Upload Your Memory View All Memories
Be the first to upload a memory!
Share A Memory
Send Flowers