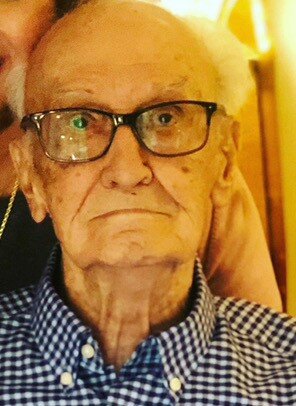 Zeb Wilcox was born to Nolia Dorcas Gregory Wilcox and Thomas Marshall (“T. M.”) Wilcox on May 3, 1930, in Greensboro, North Carolina. He was the older brother of Jimmy T. Wilcox (later the husband of Evon Cockman Wilcox). Zeb played high school football and was elected Most Handsome Boy in his senior class at Rankin High, where he graduated in 1949. He married the person elected Most Popular Girl, June Lee Tugman Wilcox. She pre-deceased him in 2019. He always considered himself blessed by her love and kindness, and he loved her devotedly throughout their 68 years of marriage.

Zeb joined first the United States Navy and then the United States Coast Guard (which enabled him to be closer to his growing family.) He performed air-to-sea rescue missions via helicopter, saving lives and receiving commendations. He attended various schools (e.g. Sikorsky Helicopter) within the service. He rose to the rank of Chief Petty Officer. During his years of service, he lived in Alaska, New York, Tennessee, and Florida, but was happiest when stationed in his home state of North Carolina, at the Coast Guard Air Base in Elizabeth City. He and June Lee retired to Greensboro, their hometown, where they lived for over forty years before moving to Raleigh to be closer to Marsha.

Zeb was known for his wit and his linguistic skill; in high school, he won the drama medal, and he always had a flair with words. Even after a stroke at age forty-two that left him with speech impairment, he could still tell a joke better than anyone around. He thrived on being the center of a gathering of loving, laughing family. He and June Lee raised three children: Rhonda V. Wilcox (Richard Gess), Marsha Lee Wilcox, and Charles Patrick Wilcox (Lisa Cody Wilcox). Rhonda and Richard’s son Jeff Gess (Nicole Berube Gess), Marsha’s children Andrew Haynes, Brian Haynes, and Margaret June Haynes, and Patrick and Lisa’s children Thomas Wilcox (who died in 2013), Alexandra Wilcox White (Ryan White), and Matthew Wilcox, all loved their Grand-daddy Zeb, as did Alli and Ryan White’s children—Zeb’s great-grand-children—Thomas, Mae, and Lucy June. His humor, his sharp perceptiveness, and his love will be sorely missed and long remembered.

A visitation will be held for family and friends on Sunday December 18 at 1:00 pm at Pierce-Jefferson Lambeth Chapel, with funeral service to follow at 2:00 pm followed by interment at Lakeview Memorial Park in Greensboro.

In lieu of flowers, donations may be made in his honor to the Juvenile Diabetes Research Foundation of Greater Western Carolina.

Share Your Memory of
Zeb
Upload Your Memory View All Memories
Be the first to upload a memory!
Share A Memory
Send Flowers