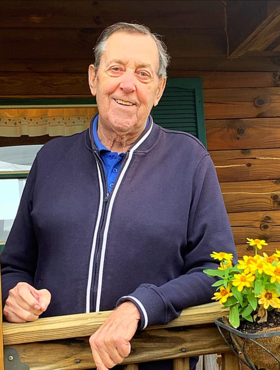 He was born to the late John and Alice Atkinson on August 19, 1940 in Punxsutawney, PA.  He was a graduate of Greensboro High School and served four years in the Navy Air Corps from 1958 to 1962.  He was a devoted employee of Western Electric, which later became Lucent Technologies, for 36 years.

In his early years Bob loved flying airplanes, taking his girls for rides, doing roller coasters and tricks.  He also flew parachute jumpers and earned his flight instructor license.  Other hobbies included playing frisbee and video games and watching basketball and NASCAR.  He also served as a little league baseball coach.  In his later years he could be found attending all of his grandchildren’s activities, often times video-taping the events to be shared with his family and friends.

Bob also loved motorcycles and sports cars.  His car could always be recognized by his signature personalized license plate, RYLOS, from one of his favorite movies, The Last Starfighter.

By far his favorite activity was spending time with family, making them laugh with his quick-witted humor.  He also loved playing with his grandchildren. Many days were spent on the church field playing frisbee or roller bat and swinging the grandkids by their ankles.   The grandkids could always be heard saying, “Do it again paw-paw!” or “Me next, me next!”.

Bob was preceded in death by his parents, John and Alice Atkinson, brother Fred Atkinson and his former wife of 38 years Faye Atkinson.

Funeral services celebrating his life will be held at 1:00PM Tuesday, October 18, 2022, at the Pierce-Jefferson Lambeth Chapel in Greensboro. Interment will follow in Westminster Gardens. The family will greet friends Monday, October 17, 2022 between 6:00PM to 8:00PM at the funeral home.

The family would like to thank the Adams Farm Kidney Center for the outstanding care they gave Bob over the past few years.  They treated him kindly and provided loving and compassionate care as he underwent his dialysis treatments. We would also like to thank the doctors, nurses and staff of Moses Cone Hospital for the care Bob received during his time in the hospital.