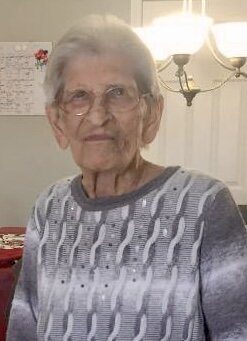 Virginia is survived by her daughters, Patricia "Trish" Wagoner and husband, Darrell of Burlington, and Deborah Wright of Cherryville, NC; two grandchildren, Jena Goodman of Cramerton, NC, and Josh Wright and wife, Nichol of Winston-Salem, NC; three great grandchildren, Alexandra Koone of Lowell, NC, and Madeline and Lucas Wright of Winston-Salem, NC; and one brother, Bill Noles of Stanley, NC.

The family would like to extend a special thank you to all the people of AuthoraCare Hospice in Burlington, NC who began this journey with us over two years ago, especially Eddie Self for ministering to us and Maw-Maw too many times to count over the last two years.