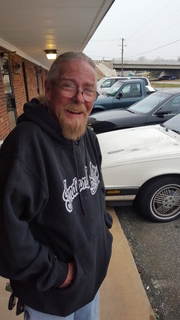 A native of High Point, NC, Bobby was the son of Harold Tucker and Adelaide Ross Levesque, both deceased. Bobby was a veteran of the United States Marine Corps, having served four years between Hawaii and Camp Lejeune, NC. His son James followed his example of military service by joining the U.S. Army, where he served seven years, including two combat tours in Iraq.

Bobby was a high-spirited, energetic, and loving person. He knew how to have fun and was typically the life of the party. He was a mechanic and auto-body technician who did wonderful work, including several of the cars he restored and/or painted winning awards, such as the world-renowned Hershey Antique Auto Show in Hershey, PA. He was a musician (guitar, bass, keyboard, and vocals) and live sound engineer, having run sound for such national acts as Percy Sledge and Night Ranger, among others. He was in several bands over the years that played numerous shows across North Carolina and surrounding states, including the band Windfall he started with his son James, which was active for several years in the late 90’s. Dad was a jokester he loved to play pranks on me and do anything he could to make me laugh. Everyone I knew that came across him always loved him and his positive outlook on life. Because of his musical background he also got his daughter Kirsten into music as well and that was their favorite thing to do together, sing and have fun.

In addition to his parents, Bobby was preceded in death by his wife, Myra Fulp Tucker.

Share Your Memory of
Jonathan
Upload Your Memory View All Memories
Be the first to upload a memory!
Share A Memory
Send Flowers