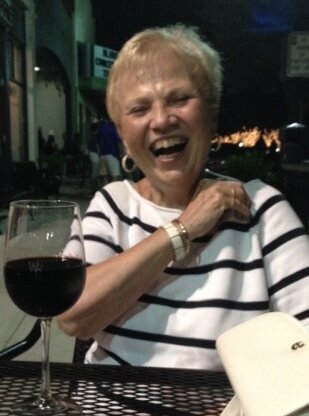 Janet Hoke, 75, of Liverpool, NY passed away peacefully on Sunday, June 12, 2022 at Trinity Glenn after bravely battling Parkinson’s disease for the past seven years.

All who were blessed to have counted Janet as a friend will attest to what a special woman she was, and she could make a friend anywhere at any time. Not only was Janet, kind, thoughtful and loyal, but she was strong, determined and sacrificial. Putting others before herself never seemed like a choice she made as much as simply a part of who she was. The older she grew the more apparent it became how much Janet treasured the time she spent with her family and friends. It did not matter if it was vacationing with her children and grandchildren, shopping trips that could last for days at a time (we are anticipating a card of condolence from Macy’s any day now), or just sitting around the table with a cup of coffee (or a few glasses of wine) for hours at a time, quality time was without a doubt her love language. She loved others well and was a bigger blessing to others than she realized.

Janet is survived by her son, Gregory Hoke and wife, Kathy; grandchildren, Isabelle, Elijah, and Ian of Kernersville NC; her daughter, Shari Whiting; grandchildren Madeline and Ethan of Atlanta GA; sister, Barbara Garito of Lauderhill, FL; and many friends and extended family.

In lieu of flowers, the family asks that you consider donating to the Michael J. Fox Foundation for Parkinson’s Research www.michaeljfox.org/donate/donate-parkinsons-disease-research

Services for Janet Hoke
There are no events scheduled. You can still show your support by sending flowers directly to the family, or planting a memorial tree in memory of Janet Hoke.
Visit the Tribute Store