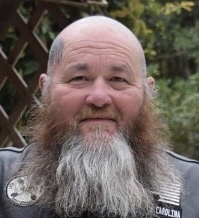 Steven Snyder, 55, of Kernersville NC passed away peacefully at his residence on Friday May 6, 2022.

Steven was a 1986 graduate of Southern Guilford High School. He was a truck driver for Mutual Distribution for many years. Steven enjoyed many seasonal and side jobs to keep busy and socialize, as only he could do so well. His past times hobbies and interests include riding motorcycles and supporting fellow bikers, fire arm enthusiast, and was an avid animal lover. If you knew Steve, you knew the love he showered upon his family, friends and acquaintances. His life story touched so many, and will continue to do so in the legacy he leaves behind. Rather you knew him as Steve, Tattoo Steve, Taz or Bulldog, his memories will last forever with us. MLH&R until we meet again.

Services for Steven Snyder
There are no events scheduled. You can still show your support by sending flowers directly to the family, or planting a memorial tree in memory of Steven Snyder.
Visit the Tribute Store

Share Your Memory of
Steven
Upload Your Memory View All Memories
Be the first to upload a memory!
Share A Memory
Send Flowers