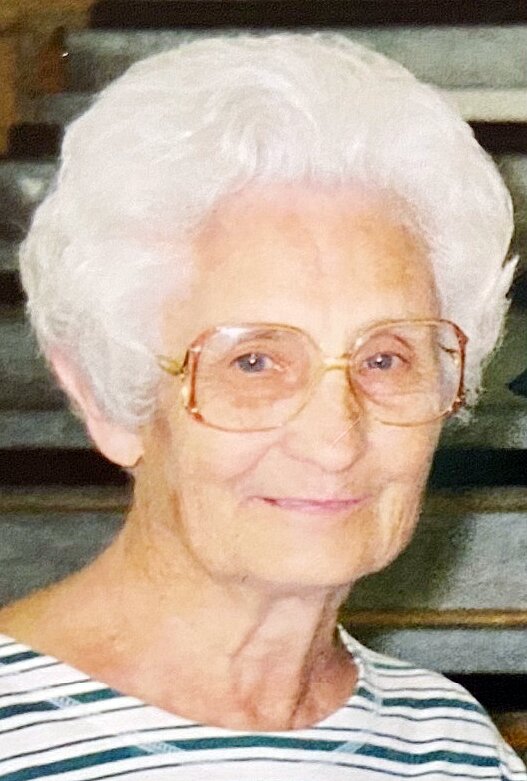 Mrs. Hazel “Irene” Wall Ledford, age 97, of McLeansville, NC, gained her wings on January 23, 2022, while being cared for at her home. She was born in Guilford County, NC to the late Mr. Jonah and Lela Wall. Irene married the love of her life, Lee Gaither Ledford, on March 2, 1940. She spent most of her earlier married life in the Summerfield community. Irene was employed at Cone Mills for 33 years prior to her retirement. She loved yearly trips to Atlantic and Emerald Isle beaches with her family. Irene and Lee made many trips to the NC mountains, to include traveling the Blue Ridge Parkway. Her favorite pastime was working jigsaw puzzles, which she did even at the age of 97. Irene loved her family and always enjoyed Sunday lunches and holiday family gatherings at her home. She was the matriarch of the family.

Irene was preceded in death by her husband, Lee Gaither Ledford; son, David Lee Ledford Sr.; son, Paul Eugene Ledford; and grandson, Larry Eugene Ledford, as well as her brothers Chester and Robert Wall and two sisters Gertrude Wilson and Bertha Minor. She is survived by her daughter Dorothy Staley (Graham) of the home; daughter Helen May (William) of McLeansville; daughter-in-law Mary Ledford of Ramseur; grandchildren David Ledford Jr. (Gene) of Ramseur, Tracy May (Tonya) of Reidsville, Cliff Staley (Meredith) of Reidsville, Tonya May of McLeansville, Allen Staley (Megan) of Haw River, and Brandy Wilkins (Brant) of Wilkesboro. She also had 12 great-grandchildren, and 1 great-great-grandchild.

A joint service to celebrate her life, as well that of as her son Paul Ledford, will be held on Tuesday, February 1, 2022, at Pierce-Jefferson Funeral Home- Lambeth Chapel, Greensboro, NC by Pastor Donnie Strader. The burial will follow the graveside service (Forest Lawn Cemetery) of her late son. Irene’s final resting place will be at the Smith Grove Baptist Church Cemetery, Colfax, NC. The family will receive friends from 10 a.m. to 11:45 a.m on Tuesday, February 1, 2022, at the funeral home and other times at the home.

In lieu of flowers, memorials may be made to AuthoraCare Foundation (Hospice), 2500 Summit Avenue, Greensboro, NC 27406.

Share Your Memory of
Hazel
Upload Your Memory View All Memories
Be the first to upload a memory!
Share A Memory
Send Flowers