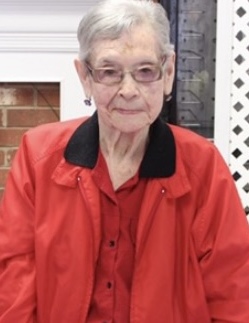 Graveside Funeral Services celebrating her life will be held 1:00PM Wednesday, February 3, 2021 at the Shady Grove Wesleyan Church Cemetery for immediate family only. Masks and social distancing will be strictly observed due to Covid restrictions.

She was born on August 2, 1929 in Colfax, North Carolina to Carol and Geneva Harvey. Esther married Anderson L. Scott on August 9, 1947 and were married for 67 years. They raised two sons, William Anderson Scott and Robert Mark Scott. Esther was a homemaker and became a licensed practical nurse after attending Forsyth Technical School in mid-life.  She worked as a private duty nurse throughout Kernersville, Forsyth Memorial Hospital, and ended her career as an office nurse for Dr. Leo Record in Kernersville. Esther’s whole life revolved around Shady Grove Wesleyan Church, where she was a lifelong member with her family, grandchildren and great grandchildren.  She served on the church’s board and sang in the choir for many years.  She cherished visits, family get-togethers, and especially calls from her grandchildren.

In addition to her husband and parents, Esther was preceded in death by her sister, Ruth Quiseberry.

In lieu of flowers, please make donations to Kernersville Shepherd Center or charity of choice.